Retirement researchers Michael Kitces and Wade Pfau published papers on glide paths in the Journal of Financial Planning in 2014 and 2015, including Retirement Risk, Rising Equity Glide Paths, and Valuation-Based Asset Allocation, suggesting a rising glide path for retirees beginning with a low equity allocation early in retirement and rising throughout. Researcher David Blanchett has published contradicting studies that show better performance from declining equity glide paths throughout retirement, which has been the traditional recommendation, in Revisiting the Optimal Distribution Glide Path.

As you can imagine, these conflicting recommendations have caused more than a little anxiety among advisers and do-it-yourselfers and experts like William Bernstein have even entered the discussion.

Ultimately, the research has left some retirees asking whether they should follow a rising glide path or a declining glide path.

The correct answer is "none of the above" – they should follow their personal financial situation as retirement progresses. (See Dominated Strategies and Dynamic Spending.)

Imagine two 90-year old retirees. Rising glide paths would suggest that they both hold large equity positions, while declining glide paths would suggest they both hold large bond positions. Now imagine that one still has tons of savings left, more floor income than she needs and is, as William Bernstein puts it, investing for her heirs. The other has barely enough wealth left to cover another five years of expenses. Should both invest with the same asset allocation because they are the same age? A similar argument can be made at any age and the correct answer is that we need to consider more than age or retirement date when determining our asset allocation.

This research aims to isolate one factor, the retiree's planned retirement date (or, roughly speaking, the retiree's age), and to determine its effect on the retirement investment problem. The question it attempts to answer could be framed in a number of ways, like:


I feel certain that all of the authors of these papers would agree that a customized, individual retirement plan will always be preferable to one based entirely on the retirees age/retirement date. (One of the authors actually told me this, so it isn't entirely a guess.)

As explained in Wade's post of March 2nd on RetirementResearcher.com, To Rise or Not to Rise, the authors are currently comparing notes to understand why their results differ. Initial thoughts are that the differences are explained by different capital market expectations. Both sets of expectations, or assumptions about future markets, are imperfect predictions and either (or neither) might turn out to be right.

As Wade explains, "… The choice of glide path is not always fixed, as it does vary with the stock market valuation level at the time of retirement."

So, which glide path is best if we ignore everything about a retiree except the planned retirement date? We're not sure, but the research does seem to show that it depends on stock market valuations and interest rate expectations at the time of retirement (no surprise).

How does this information help the typical retiree invest her savings if she doesn't really care how the mechanisms of retirement funding work? It doesn't help much, in my opinion, at least not at this point. As Blanchett suggests, more research is needed.

More importantly, this information won't apply to most advisers or do-it-yourselfers because they will be willing to do more work than to simply write down a planned retirement date. They can find a much better fit.

An individual household's optimum asset allocation should be estimated by considering several more factors, including how well their retirement is funded and the maximum loss they could stomach in a bad market crash. By continually managing asset allocation based on current conditions of the retiree's finances, at the end of retirement that retiree's glide path will have followed some curve that will probably look like one of the half dozen or so currently recommended glide paths simply because they pretty much cover the entire range of possibilities. (The 2014 Investor's Guide issue of Money magazine identified six glide path recommendations that had little in common. Pozen's has a tongue sticking out the end. What's up with that???) 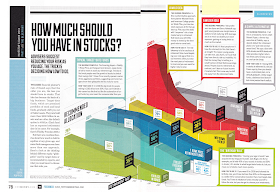 We will not know in advance which glide path that retiree will end up following. It will be determined by a random walk through market returns, how long we live, our expenses, the decisions we make and many unpredictable factors.

It's important to understand that research of any kind is new information, or a new argument, that we should consider in light of what we already believed to be true. It doesn't automatically replace what we thought we knew. (See Think Like a Bayesian Pig.)

When this evidence conflicts, it gives us a chance to learn more. This research doesn't tell us that one glide path is better or worse — both sides make good arguments — but it begins to tell us under what conditions one glide path might perform better. That doesn't necessarily mean one is right and the other wrong or even that a well-planned retirement needs one. Please keep that in mind when you read academic papers. They are usually new evidence or new arguments and not universal truths that dispel old beliefs.

What should a retiree do with this information about glide paths? Probably nothing. You should customize your asset allocation instead of following a glide path. There are a couple of interesting points you can use, however. First, it turns out that a 60% equity portfolio throughout retirement isn't a bad "couch potato" allocation.

Second, as Wade points out, you might give more consideration to cash and short bonds than to intermediate bonds. "Another important point in that summary is that we did look at both short-term (6 month or 1 year) bonds as well as 10-year bonds in our analysis, and we found that the shorter-term bonds were of much greater help than longer-term bonds. When the focus is on protecting from downside risks, the additional volatility caused by the 10-year bonds hurt retirement outcomes by more than could be compensated by their higher average yields. This ties into David’s article as well, since his bond allocation was 75% to (I believe) 10-year bonds, and 25% to cash."

This is an important point to remember when you think about taking on more risk to increase the return of the bond portion your retirement portfolio. Bonds and cash are there to protect against downside risk, not to maximize portfolio return.

You can also just follow the ongoing research. I find the discussion quite enjoyable. It's a work in progress.