In Pure and Mixed Strategies, I noted that we can make life simpler for retirees by winnowing out dominated strategies and strategies that are logically unsound. I showed in Dominated Strategies and Dynamic Spending that dynamic updating of sustainable spending amounts dominates the SWR-Fixed and SWR-Variable strategies, so I cross those off my personal list of reasonable alternatives for retirement income plans.

I believe that there are strategies that are flawed, some logically sound strategies with problems, and others that just give me a queasy feeling. So, in this post, I will share my feelings on those three categories of retirement income strategies.

The RMD Strategy, in which the retiree bases her spending on the required minimum distribution amounts the IRS mandates for IRA’s is also a dominated strategy. (You can read about RMDs here.) Dynamically updating all important variables of sustainable spending will always perform better than a strategy of updating only the retiree’s age and new portfolio balance, as the RMD strategy does.

Logically Unsound Strategies: There are also retirement income strategies that simply aren't logically sound, like the "Spend Dividends Only" strategy. This strategy seems to be based on a misunderstanding of how dividends work.

I won’t devote a lot of explanation here, because the topic has been thoroughly vetted by others. I recently recommended this explanation by Canadian Couch Potato.  But, in short, when a company pays you a dividend on a stock worth $10.00, they pay you perhaps 30 cents in cash and the market immediately reduces your stock’s value to $9.70. You are no better off and no worse off. (You may actually be a tad worse off if you hold the stock in a taxable account because dividend payments can be a taxable event.) Furthermore, investing primarily in dividend-paying stocks will limit your portfolio’s diversification.

I cross Spend Dividends Only off the list because it is illogical and, as Wade Pfau recently put it, simply isn’t a valuable strategy.

SWR is another logically unsound strategy when applied literally. It ignores conditional probabilities of failure. A common counter-argument is that no one implements SWR literally. I hope that is correct, but I doubt it.

Problematic Strategies: Now, let’s look at an example of a strategy that has not been shown to be dominated and that is logically sound, yet still problematic. The Bond Ladder and Longevity Insurance (BLLI) strategy proposed by Professor S. Gowri Shankar, for example, is logically sound but suffers from two problems.

(If the BLLI strategy is unfamiliar, there is a nice summary of it and several other strategies in this paper by Wade Pfau and Jeremy Cooper.)

The BLLI strategy proposes building a 20-year TIPS Bond Ladder and funding later years (beginning age 85 for someone retiring at 65) with Deferred Life Annuities (DLAs). The idea is that the retiree won’t have to give up control of his capital for the first 20 years – a common complaint with annuities – and that deferred life annuities are cheaper than immediate life annuities. (See Wade Pfau's Why Retirees Should Choose DIAs Over SPIAs.)

The idea of maintaining control of capital and liquidity is also somewhat problematic, since the retiree will need the money in her bond ladder for living expenses to age 85 and can’t really spend it in an emergency. Funding the entire 30 years with a TIPS bond ladder and prematurely spending the most distant rungs is problematic enough, but it is possible that she won't live the full 30 years and may not need to spend that money ever. Diverting funds meant to meet living expenses during the first 20 years of retirement is significantly riskier.

Nonetheless, it is neither flawed nor dominated and stays on the list.

Strategies that Make Me Queasy: Some strategies can be logical and not dominated and perhaps not problematic to some, but still make me feel uncomfortable. To wit, the Floor-leverage Rule and Zvi Bodie's floor-and-upside strategy of 90% TIPS bonds and call options (LEAPS). Both are known as "barbell strategies" because they invest in extremely safe and extremely risky assets with nothing in between.

As I suggested in Hope and Your Retirement Portfolio, most retirees won't be comfortable with the possibility of losing all or most of their upside "hope" even with a comfortable floor in place. Retirees who purchase call options will often see those options expire "out of the money", in other words, worthless. The financial argument will be that the options served their intended purpose, even the ones that expired worthless, and that is correct. Most of the retirees I know, however, will find that cold comfort when they see a few ten thousand-dollar call positions disappear in a poof of smoke. Actually, it isn't even that dramatic. It's just not there, anymore.

The Floor-leverage Rule makes the LEAPS approach look tame in comparison. The idea for its upside portfolio is to employ triple leverage at the equity end of the barbell. The typical investor can't purchase a stock portfolio with triple leverage. It's illegal. But, as Sharp and Watson point out, they can purchase shares of a 3x leveraged ETF like UPRO.

I'm crossing Floor-leverage off the list of reasonable strategies not because it makes me queasy to apply huge leverage to my entire upside portfolio (it does), but because the upside strategy doesn't work. The problem is that these ETFs are not the same as a triple-leveraged stock index fund. In fact, they aren't portfolios of stocks, at all. They're portfolios of derivatives that only track stock indexes for short periods of time. They're best suited to short term investments, which shouldn't be part of a retirement income plan.

Bodie's options strategy stays on the list. It's riskier than I can accept and I don't think it will fit the temperament of most retirees, but it isn't flawed. It will outperform other strategies in some scenarios, so it isn't dominated.

Some of the strategies I've crossed off the "sound" list may fit your individual financial situation and may be bets you're willing to take. Some of them will even be recommended by advisers. I would pare down the list of reasonable retirement income strategies by at least a third, as shown in the following table. This is my personal perspective and not everyone would agree. 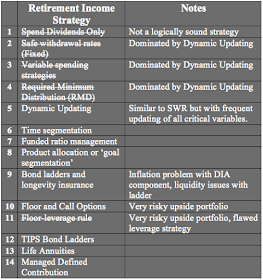