The Real Cost of Nominal Annuities

There are a number of ways that a retiree could speculate on the direction of future inflation but I doubt that many would want to. I imagine that most retirees would prefer to "inflation-proof" their retirement plan to the extent possible, instead. It’s possible to speculate on inflation, however, without even being aware that you are.

My last post, Remember Inflation?, was intended as preparation for this one and I recommend you read it first unless you feel you have a good understanding of the topic.

I recently co-authored a paper entitled, “Hedging Against Inflation Risk with Real Annuities” with economist, Zvi Bodie. Dr. Bodie has made key contributions to Life-Cycle economics and pension planning. If you’re studying retirement finance and are unfamiliar with his work, then you need to remedy that. I’ll provide links in the references below to get you started but the obvious places would be his website[1] and two of his books, “Risk Less and Prosper”[2] and “Worry-Free Investing.”[3]

Here's the crucial point of the paper in a nutshell. We obtained annuity quotes recently for a nominal (no inflation protection) income annuity, a nominal income annuity with a 3% annual cost-of-living adjustments, and a "real" annuity with no caps that is adjusted annually for inflation based on the Consumer Price Index for All Urban Consumers (CPI-U).[4]

I can purchase a nominal annuity that pays out $6,440 a year but because I can't predict future inflation, I have no idea how much purchasing power it will have in the future. Its future purchasing power might be a lot more or a lot less than $4,550 will purchase today in 2019 (see the first row of Table 1).

The rightmost two columns of Table 1 show the purchasing power in today's dollars twenty years from now if future inflation should mimic the high inflation of the 1970s and 1980s (column 5) and the same if future inflation looks like the low-inflation 1950s and 1960s (column 6). Both real payouts, $,1723 and $4,109, would have been significantly lower after twenty years than the initial $6,440 payment of the nominal annuity.

I can purchase a nominal "graduated-payment" income annuity that pays out $4,670 for the first year with a payout that increases 3% each year thereafter regardless of the rate of future inflation. Like the level-payment nominal annuity in row one, I have no idea how much purchasing power it will have in the future.

I can purchase a CPI-adjusted annuity today that pays out $4,550 a year for as long as I live (row three). If I live for 30 years or more, it will still provide $4,550 of purchasing power in 2019 dollars. This is the only annuity I can purchase from among these three for which I can predict future purchasing power.

That's a trick question. The correct answer is that we can't know until the end of retirement. Nominal and real dollars are apples and oranges so we can't compare them directly. We need to convert the nominal dollars to real dollars — their future purchasing power — to compare the two. That's easier said than done because it requires that we make a guess about unpredictable future inflation rates.

If future inflation is benign, as it was from 1950-1970, then both the nominal level-payment annuity and the nominal annuity with a 3% COLA seen in Chart 4 would end up purchasing more at today's annuity prices than the CPI-adjusted annuity. 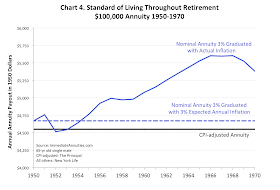 On the other hand, if future inflation is historically high, as shown in Chart 3 of the 1970s and 1980s, then the CPI-adjusted annuity would end up purchasing more than either of the two nominal annuities. 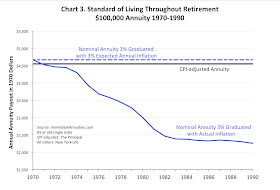 Charts 3 and 4 represent historically high and low inflation rates for 20-year periods since 1913 so other periods would have shown results of inflation ranging between those two.

The CPI-adjusted annuity has no inflation risk. It is a true inflation hedge. Purchasing a nominal annuity (or a nominal bond) is a bet on future inflation that you probably don't want to make.

Where does the graduated-payment (COLA) annuity fit in? The annual increases are chosen when you purchase the annuity. Adjustments are not linked to inflation but increasing income would offset some inflation, though it would provide a lower initial payment.

Joe Tomlinson did an analysis for the Journal of Retirement Income and concluded that "An inflation-indexed SPIA would be ideal. A COLA-SPIA may be the next best alternative.'[6] 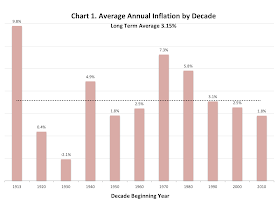 I have two concerns regarding inflation. First, even today's low inflation rate of around 2% will roughly halve a retiree's purchasing power over a 30-year retirement. Every retirement plan should consider inflation risk but after three decades of low inflation, it may not get the attention it deserves.

My second concern, also expressed by Tomlinson at Advisor Perspectives, is not the risk that inflation runs a little more than average but that it substantially exceeds average inflation for a prolonged period, as it has done in four of the last eleven decades (see Chart 1), and decimates the purchasing power of a nominal pension or a nominal annuity with or without a COLA. This is a potentially catastrophic outcome that isn't adequately addressed by nominal annuities even with a COLA. As I have often said, I believe retirement plans should take unacceptable outcomes off the table.

If you don't want to buy a CPI-adjusted annuity, have already purchased a nominal annuity, or have a pension without inflation protection, it's important to understand your inflation risk exposure and to try to mitigate it in other ways. You can do this by stress-testing your retirement plan to make sure you would retain minimum-acceptable income even in a period like the 1970s and 1980s. If you would not, you then need to look for other ways to mitigate inflation risk.

You can stress test this easily with planning software like Maxifi Planner[7] or ask your planner to run a high-inflation scenario for you.

The risk of purchasing a nominal annuity or owning a nominal pension has to be considered within the context of the rest of your retirement plan. For example, if a severe loss of the purchasing power of the pension or annuity would not compromise your standard of living because they represent a small portion of your income-producing assets, then they pose less risk to your plan. A nominal annuity or pension that is a major source of your plan's income would obviously be riskier. Purchasing a nominal annuity can be a rational choice in some scenarios and the best way to see that is to run the stress test.

Social Security benefits have historically been adjusted for inflation but most pensions are not. If you have a nominal pension or annuity then its purchasing power will almost certainly decline significantly over a long retirement.

The key takeaways are these. Express your retirement plan in real dollars or insist that your planner do so. Understand your retirement plan's exposure to inflation risk. Consider the possibility and ramifications of not enjoying three more decades of low inflation. Decide if you're willing to speculate on future inflation rates.

So, which annuity has the largest payout, the nominal or the CPI-adjusted? Unfortunately, only time will tell. The only meaningful comparison is based on purchasing power, not first-year payments. You can only be sure about the real annuity's purchasing power.

Unless you're a gambler, why bet on low future inflation? You can completely hedge inflation risk with a no-cap, CPI-U-adjusted annuity. The same logic applies to TIPS and I Bonds instead of nominal bonds.

I'll describe U.S. Series I Savings Bonds in my next post.


[3] Risk Less and Prosper at Amazon, by Zvi Bodie.


[4] We obtained recent quotes for income annuities for an unmarried 65-year old male. The nominal annuity quotes were provided by New York Life and the CPI-adjusted annuity quote was obtained from The Principal. The Principal is currently the only U.S. provider of CPI-adjusted annuities. (We found one additional provider that only sells to its group members.) The Principal sells a "real" annuity through the purchase of a CPI rider for a single payment income annuity (SPIA). Quotes for these annuities are available through ImmediateAnnuities.com and BlueprintIncome.com.


[6] Making the Case for a COLA-SPIA, Kerry Prechter, The Retirement Income Journal.