Basing Your Allocation on Half Your Assets

Although we tend to focus on our investment portfolios, Social Security benefits, and annuities when we think about retirement, these aren't the only sources of household wealth. In fact, they may not even be the largest sources of wealth. For young people just starting a career, human capital (the capacity to exchange labor for wages over their career) is likely their greatest asset. In many older households home equity is the largest component. By focusing solely on our portfolios, we may overlook much, perhaps even most, of the household wealth at our disposal to fund retirement.

This is not a new concept – the Retirement Income Industry Association (RIIA), for example, has advised us for quite some time to plan retirement using the “entire household balance sheet” – but Blanchett and Straehl take the research to a new level by studying the correlations between these components of wealth. More on that later. First, let's look at a chart from the paper that shows a hypothetical life cycle of these components of wealth. (Click to enlarge.) 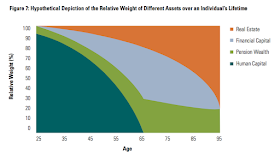 A young person beginning her career may have an abundance of human capital, or the present value of a future lifetime of paychecks, and a small amount of pension wealth, the present value of future Social Security benefits. She will likely own no real estate and have limited savings. Financial wealth will typically peak around retirement age when she stops saving and begins spending those savings, and her human capital all but disappears. By the end of life, her wealth may largely consist of home equity, unless she uses it to fund retirement. This represents typical wealth changes and yours might be quite different, but the hypothetical illustration is informative.

The diagram suggests that focusing solely on financial wealth poses the biggest disconnect for young savers, who have mostly human capital, but it also illustrates for retirees and those approaching retirement how dramatic the change can be once the paychecks end.

As the authors point out, previous research has shown that other household wealth investments may exceed investment capital. In 1993, Nobel laureate, Gary Becker, found that human capital made up four times the value of all other wealth combined. In 2000, Heaton and Lucas found that human capital makes up nearly half of household wealth while financial assets constitute less than 7%.

In the above diagram, granted hypothetical, financial assets never exceed 50% of wealth so, the authors ask, how can an asset allocation based on less than half your assets be optimal?

How can an asset allocation based on less than half your assets be optimal? –Blanchett and Straehl [Tweet this]


Primarily, Blanchett and Straehl recommend that we broaden our focus from the narrower investment portfolio to the entire household balance sheet and recognize that some of these components of wealth can be highly correlated, which means “risky”, in the sense that that some might tank simultaneously. In 2007, for example, both the stock market and the real estate market crashed.

The Tech Bubble provides a historical (perhaps even historic) example. Many Enron employees held a lot of Enron stock in their retirement portfolios, so their human capital (their paychecks from Enron) were highly correlated with their retirement savings. When Enron went under, employees lost both their jobs and their retirement savings. Enron succumbed to accounting fraud, but the employees of many legitimate high-tech companies found themselves in a similar situation. Blanchett and Straehl recommend that if we work in the tech industry, for example, there are highly correlated stock sectors to which we should reduce our exposure.

The authors draw on modern portfolio theory (MPT) for their analysis. MPT shows that we can combine uncorrelated assets to create an optimum return for a given level of risk or vice versa. While MPT optimizes stock and bond allocations to find the least risky way to earn an expected rate of return at a point in time (or the maximum return for a given level of risk), Blanchett and Straehl apply the same thinking to their four categories of household wealth over a life cycle, pointing out that these broader asset classes can be correlated, as well. The result can have a significant impact on our portfolio allocation. The authors find differences of up to 20% for optimal portfolios.

Viewed independently, we might conclude that a 50% stock allocation is appropriate for our investment portfolio. For those of us whose career is more “bond-like”, or who have a lot of pension wealth, a higher stock allocation might be appropriate when we consider total household wealth.

If you are unfamiliar with the concept of having a career that is either stock-like or bond-like, it comes from the work of economist, Zvi Bodie. Moshe Milevsky published a book on the topic. Here’s an example of the concept.

In the late nineties, I left a job at Cable & Wireless, a British phone company founded in 1866. I had a very nice and very dependable salary and even earned a small pension, but I owned no company stock. I traded this bond-like, relatively safe job with limited upside for a position at America Online with no guarantee that the company would even survive. I accepted a significant pay cut in exchange for stock options that would pay off nicely if the company thrived. I traded a bond-like job for a stock-like job.

(Michael Kitces provides a bit more thorough description of the concept in this piece.)

Many of the young employees I knew at AOL held nearly all their wealth in AOL stock options yet, in the heady days of the Tech Boom, invested everything they could in more tech stocks. Some even bought more AOL stock. Those that got out before 2000 won big. Many of those that held on lost everything. Bodie, Milevsky, Blanchett, Straehl and others would recommend that they should have invested outside money in safe bonds, instead.

If you lack a basic understanding of MPT, you might find the Blanchett and Straehl paper dense. Michael Kitces wrote an excellent review of the paper that is more accessible, but still a bit challenging.

It’s probably impractical for most people to perform mean-variance optimization on their choice of careers, regional real estate prices, Social Security benefits and portfolio allocation as Blanchett and Straehl did. There are some general conclusions, however, that we can take away from the research and apply to our own retirement plans. Make sure your retirement plan considers all of your resources, not just your savings. If your job is bond-like, invest a little more in stocks and vice versa.

Think about how the various components of your wealth might be correlated. Not investing most of your retirement savings in the company that hands you a paycheck should be a no-brainer after Enron, but real estate prices might also be highly correlated with your career.

If you take this approach, you need to be aware that your investment portfolio will be allocated to optimize risk and return for your total household wealth. You may be disappointed in your investment returns if you use those alone as the benchmark for your financial success instead of your total wealth.