Risk and the Life Cycle

I think most retirees probably have a moment not long after calling it quits when the risk of their new endeavour fully dawns on them. I think mine occurred about twenty minutes after I left the building.

Most retirees seem to intuitively sense that they have entered a stage of life with increased risk, but probably few can articulate the issue as clearly as William Bernstein.

In his latest e-book, Rational Expectations, Bernstein compares a young person who has just begun to save for retirement, a 45-year old executive who has already saved enough for retirement, and a retired person all at the beginning of the 1929 market crash.

The 45-year old in Bernstein's example saw his portfolio fall 74% by the end of June 1932, recover a bit by 1937 and fall another 48% by March 1938. Fifteen years later at age 60, he had permanently regained his 1929 purchasing power. He would ultimately have been fine, assuming he had the courage to stick with stocks through that storm. Most didn't.

The Great Depression is ultimately a boon for the young worker because he will be able to buy stocks cheap and their value would have increased dramatically over his working career. Bernstein has long pointed out that volatility and even market crashes early in life are ultimately a huge advantage for the young stock accumulator.

The retired investor, however, found himself in the worst position of the three. Without the ability to work longer, delay spending from savings, or accumulate stocks cheaply, the typical retiree would never have recovered. He would have needed a 3.6% spending rate to nurse his portfolio along for 30 years. In Bernstein's words,


"The overarching lesson of these three men, then, is that the older you are, and the fewer working years you have ahead of you (or, to use a four-bit term, the less human capital you have), the riskier stocks are. For the young saver, stocks are not that risky. For those in the middle phase of their financial life, they are quite risky. For the retiree, they are as toxic as Three Mile Island."

The important difference among these investors of different ages is human capital, or one's ability to earn wealth in the labor market. The young worker has tons of human capital and little else. The mid-career worker has human capital remaining but the retiree has almost none.

The following chart, from a Wade Pfau column in Advisor Perspective, shows the trends of human capital and financial capital over a typical lifetime. Financial capital includes your portfolio and all other financial assets. Human capital actually has a complex definition and several dimensions, but think of it here simply as the present value of all the income you will earn in the future. 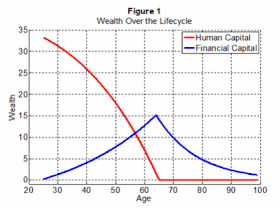 The mid-career worker can use remaining but limited human capital to postpone retirement, delay spending her retirement savings, rebuild her savings over time and reduce the number of retirement years she will need to support. Her primary loss will have been not being able to retire as young as she had hoped.

The retired investor has little or no remaining human capital and must continue to spend retirement savings to live after a crash. He will continue to spend down his stock portfolio by selling when equity prices are at their lowest. He will have no cash to buy cheap equities. If retirement has a three-edged sword, surely this is it.

It is sometimes argued — incorrectly — that stocks become less risky the longer you hold them. Actually, stocks are risky no matter how long you hold them.

Stocks generally do become riskier, however, the older you get. Until well into retirement, at least. Their volatility isn't affected by your age, of course, but the financial damage that volatility can create is helpful when you are young, troubling by mid-career, and "toxic" after retirement.

That sense of fear one gets after packing his or her photos and awards into a cardboard box and carrying it to the parking lot for the last time isn't just fear of the unknown.

There are real sharks in that water.