The Chicken and the Pig

In the mid-nineties, I began an intensive study of retirement finances. I wanted to retire early. The Tech Bubble was just getting into full swing and dollar signs were flashing before me, none so brightly as the largest "terminal portfolio values" generated by Monte Carlo simulations of safe withdrawal rate strategies. 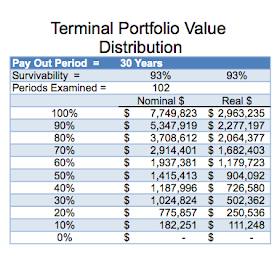 You know those best of the best-case scenarios where you retire with a million bucks, fund 30 years of retirement, spend $45,000 a year and then leave your kids a portfolio worth nearly eight mil? Never mind that those numbers are inflated dollars 30 years in the future or that they happen once in a blue moon. In the late nineties, everyone with a sock puppet was going to be rich.

(I think today, particularly after the Great Recession, most people have abandoned the constant dollar withdrawal folly and realize that they can spend more when their stock portfolio grows, but they will have to spend less if it shrinks.)

I was a big fan of systematic withdrawal (SW) strategies back then.

Then something happened in my life that caused the financial equivalent of a paradigm shift. You know "paradigm shifts" in science, right? Like when Copernicus explained that the earth revolves around the sun and not the opposite and everyone was like, "Whoa, Dude! This changes everything!"

I had one of those.

When my mother-in-law retired from teaching she had said, "You can't imagine what it feels like to realize that you will never receive another paycheck."

I had to make that money last an awfully long time to support my family. Three decades, maybe.

The sudden scarcity of paychecks after retiring wasn't the only shock. In 2000, a friend who was heavily invested in tech stocks lost his entire $4M nest egg just a few years before retiring. Literally dozens of my coworkers who held on to their company stock too long lost millions in paper profits that year and likely will never be even paper millionaires again. And those were just the people I knew. At just one of the tech companies.

Having a secure source of money to at least meet my non-discretionary spending needs began to sound pretty important.

Retirement funding is far more complex than systematic withdrawals versus floor-and-upside. Many factors come into play in selecting a strategy. Like, how much wealth you have.

A few of my former colleagues and Tech Bubble survivors escaped the carnage with tens or even hundreds of millions of dollars. They don't much need retirement plans. They can build a diversified portfolio and be pretty sure that even their grandchildren won't need a plan.

More than 90% of Americans, though, have not been able to save nearly enough for retirement. They probably shouldn't be risking anything in the stock market. Other factors that play into strategy selection include whether or not you are married and whether you have heirs. Your health is a factor. It isn't simply a matter of your risk tolerance.

I view retirement strategies as a continuous spectrum from life annuities and certificates of deposit (my mother-in-law's preferred investment) on the conservative end of the spectrum to systematic withdrawals on the riskier end. You can choose fairly precisely how much safety you want at the appropriate point along that spectrum. As a financial planner, I think my job is to place clients at the right point along that spectrum depending on their unique, current financial situations.

Sometimes, things will happen as we age to suggest moving that point along the spectrum in one direction or the other. Pulling the trigger on retirement may be one of those times. It may, as my mother-in-law tried to explain, significantly change how you view the world.

There's a fable about a chicken, a pig and a plate of ham and eggs. The chicken is involved but the pig is committed.

Most people seem like chickens to me before they retire. I was. Same goes for retirement planners who are still working. Chickens think more about spending than risk. When we retire, risk takes center stage.