My last post, Clarifying Sequence of Returns Risk (Part 1), was a bit heavy on the math for some people (that is to say, it contained some math), so I thought I would summarize it with some pictures and a few additional comments before moving on to a broader view of large losses early in retirement and a different kind — to my way of thinking — of sequence of returns (SOR) risk.

An important point from Part 1 is that the impact of the sequence of market returns on our investment results depends on the investment policies we choose.

(My charts show only 50 representative paths of the 720 so the graph doesn’t turn into a blob.) 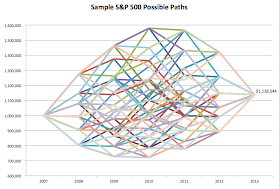 The actual order of annual returns from 2007 to 2013 was:
Reverse this sequence of returns, turn them upside down, shake them up, arrange them in alphabetical order according to height — it doesn’t change the portfolio value at the end of the six years. In other words, the stock market has no SOR risk, and consequently, neither does a Buy and Hold strategy. (SOR risk arises from buying and selling at uncertain prices at the 5 points in the middle of a 6-year period.)

Safe withdrawal rate (SWR) strategies, which sell a constant dollar amount of stocks periodically, do have SOR risk. Here’s a graph of an SWR strategy over the time period mentioned above in which the investor started with a million dollar portfolio and withdrew $45,000 a year. 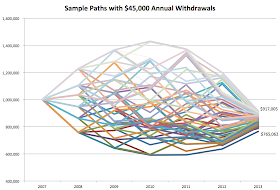 Again, there are actually 720 annual return paths the market could possibly have taken, given all permutations of 6 annual returns. Those paths end up in different places when you withdraw fixed dollar amounts periodically. The actual path the returns followed during this time period went from a million dollars to $776,461 in this scenario.

The worst path (returns ordered smallest to largest) would have taken the portfolio to $765,052 by October 2013, and the best (the opposite order) to $917,005. And that’s risk as finance defines it: uncertainty of outcomes. For this time period, only 8 of the 720 possible paths led to worse returns than the actual outcome.

Today, I’m looking at the risk associated with terminal portfolio values and not the annual payouts, which also differ by spending strategy[1]. I’m less concerned with fluctuations in annual payouts than I am with depleting the source of those payouts. 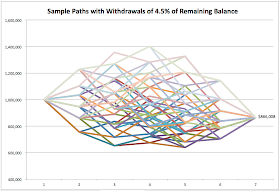 There are 720 possible paths with this strategy, too, but notice a big difference between this and the previous chart: all paths end up in the same place — $866,008 in our example. When you withdraw a constant percentage of remaining portfolio balance annually, you have no SOR risk. The ultimate portfolio value doesn’t depend on the order of market returns.

This brings me to what I believe to be a critical point: when you buy and hold, or buy or sell a constant percentage of your remaining portfolio balance periodically, you are gambling that stock prices will be higher in the future. That’s market risk.

But when you withdraw (or invest) constant dollar amounts periodically, or random dollar amounts, or changing percentages of remaining portfolio balance, you are placing a large side bet on which path those market returns will take to get there.

We get compensated (over the long term) for taking market risk. Sequence of returns risk, however, is not market risk, but risk that an investor may add with her investment policy. The market cannot reward you for that risk. Investors with SOR risk add additional risk that is not diversifiable and with no expectation of additional reward.

What strategies escape sequence of returns risk? Many of the columns I have read recently suggest that the only way to avoid SOR risk is to avoid volatile assets like stocks, or at least to reduce your exposure to stocks to reduce SOR risk. Though that will certainly do it, that doesn’t appear to be the only way.

Buy and Hold is a special case of percentage withdrawal strategies where the percentage sold simply equals zero. There is no SOR risk. Though I have not done the math, I would expect Value Averaging to avoid SOR risk. As I have shown above, withdrawing a constant percentage of remaining portfolio balance has no SOR risk.

Dollar Cost Averaging and Safe Withdrawal Rate strategies are both exposed to SOR risk — they buy or sell constant dollar amounts — and perhaps that is why they underperform in most studies[2] that compare strategies.

Lastly, the number of possible market return paths increases by a factorial every period. Given its source, you would expect SOR risk to be cumulative and to grow rapidly with the number of interim transactions, and it does. I ran a 30-year set of S&P 500 annual returns from 1983 to 2012 and found that the best and worst possible outcomes for a $1M investment and $45,000 annual withdrawals ranged from about $39,000 to $42,000 after ten years. After thirty years, the range grew to $50,000 to $200,000.

Sequence of return risk comes from our investment policies, not from the market. It is the result of the uncertainty of prices at the interim buy/sell transactions after the initial investment. There is no SOR risk with Buy and Hold because there are no interim transactions. There is also no SOR risk when we buy or sell amounts based on remaining portfolio balance, as I showed algebraically in my last post.

SOR risk cannot be diversified away, nor are we compensated for it.

Choosing an accumulation or spending strategy that introduces additional risk that is un-diversifiable and uncompensated cannot be an optimal approach in either phase.