Insurance companies often quote scary statistics like “Nearly two-thirds of Americans over the age of 65 will require long-term care” and “Long-term care can cost over $75,000 a year.” Both statements may be technically correct, but they distort the reality.

Consider the full set of statistics, as reported in a paper entitled “Long-Term Care Over an Uncertain Future: What Can Current Retirees Expect?” by Peter Kemper, Harriet L. Komisar And Lisa Alecxih, for example, and a more complex picture appears. According to this paper published in 2005: 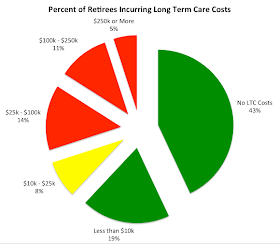 While nearly two-thirds of retirees will, in fact, require Long Term Care (LTC), some of this care will be provided less expensively at home and not all stays will be catastrophically long. The average stay will be three years, with one year at home and two in an LTC facility.

These estimates tell us that most people (61%) will be able to afford to pay for long-term care services out of pocket with no more than modest hardship.

Still, 5 percent of Americans turning age 65 will need to pay potentially catastrophic long-term care costs of $250,000 to $600,000 or more. A complete retirement plan has to consider the possibility that we will fall into that unfortunate 5 percent.

If you have $1M or more in retirement savings ($2M for a couple), you may want to consider self-insuring instead of purchasing LTC insurance. If you cannot afford LTC premiums, you will have no choice but to go the Medicaid route. If you fall in between those ranges of savings, the choice will be more difficult.

Typically, a low-probability risk of a potentially catastrophic loss is a prescription for insurance, and long-term care insurance is available. Nearly all LTC insurance, however, is found lacking in several respects and the decision to purchase that insurance is not always obvious.