As the savings, or “accumulation", phase of retirement progresses, the contribution of new savings to our net worth becomes progressively smaller as the contribution from existing portfolio growth increases. Consider the following three graphs. First, our earnings tend to grow from the beginning of our careers, peak in our mid-fifties and then decline a bit each year until we retire. 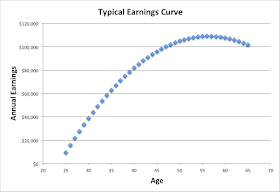 Assuming a retiree saves 10% of earnings annually until retirement, annual savings contributions would look like the following curve. Note that by retiring early, we stop saving when our annual contributions are near their peak around age 55 to 60. On the plus side, we're robbing our own savings at a time when their potential compounded growth is relatively low because they have fewer years left to grow than did our early-career savings. 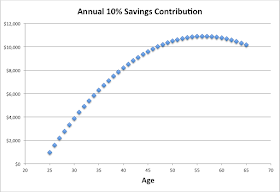 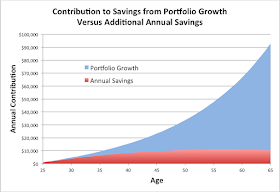 The graph above shows that if we retire early and stop saving at age 60, for example, the value of the lost savings is probably a lot smaller than the return we will continue to receive on our portfolio, but the loss can still be substantial.

The following chart shows the results of retiring at ages 55, 60, or 65 instead of age 70, using the same assumptions as above, but assuming that contributions stop at retirement age and that we don't start spending from the portfolio until age 70. (I will discuss the impact of early spending from savings in my next post. For now, let's just look at lost savings.) 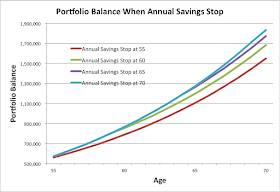 Note again that reducing savings by retiring early has a significant impact on a retiree's finances, but that most portfolio growth late in our careers comes from market returns on our accumulated savings and not new savings contributions. On its own, losing a few years of savings contributions is tolerable.

The problem is the two-edged sword created by stopping additional annual savings early and beginning portfolio withdrawals early. I'll look at the latter next time.

In the meantime, Wade Pfau is holding a free retirement planning webinar on Wednesday, July 1st at 5:00 pm ET. You can sign up for it here.
Dirk Cotton at 6:47:00 AM 7 comments:

Assume Your Social Security Number Is Already Out There

I’m going to briefly depart from my typical retirement finance post to talk about ID theft and retirees, who are frequent targets of this crime.

A few weeks ago, the IRS informed me that someone had filed a federal tax return for last year in my name and claimed a tax refund. In my case, the fraud have been discovered and IRS had not yet paid the bogus refund, as they apparently have for several hundred thousand or so other fraudulent filings. My real tax refund, tiny though it was, arrived unimpeded a few days later.

The way the scam basically works is that the criminal gathers enough of your personal financial data to electronically file a 1040-EZ and claim a tax return. The IRS is working with the electronic tax return filing industry to put better safeguards in place.

My wife freaked out when she heard. I didn’t. The difference was in our expectations.

“Some criminal has our Social Security number!” she pleaded.

“True,” I replied, “but it’s safe to assume that it’s been out there for quite a while."

News stories appear almost daily about massive security breaches. This one at the IRS. A few weeks ago it was the bank that issued my credit card. Target’s database was compromised by criminals gaining access through their HVAC service company. There’s a really good chance that your financial data has also been compromised and, at any rate, it’s safest to assume that it has been.

If ID thieves had rubbed a magic lamp in the mid-twentieth century and had been offered one wish, it would have been "tie every individual American's sensitive financial information to their Social Security number forever." Unfortunately for the rest of us, they didn't need a lamp.

A website called Information is Beautiful justifies its claim by organizing a history of major breaches in this fabulous display. See any merchants or websites there that you have used?

This brings up an important point. We worry that someone will access our home computers, tablets or smart phones and steal our financial data. While that is possible, it’s a lot easier to get our financial data by stealing millions at a time from Target than it is to sit around a coffee shop waiting for someone to log onto their bank account. The latter is actually a lot easier to protect against, and why pick up crumbs when the entire delicious cake is right there for the taking?

While the IRS works on ways to prevent fraudulent returns, there are some steps that retirees (or anyone, really) can take to secure their credit. I placed a freeze on credit reports at the three credit agencies, Experian, Trans Union and Equifax. Now, no one can use these agencies to approve loans or open new credit accounts in my name or my wife’s without my knowledge. The cost of placing, removing and replacing a credit freeze varies by state law, but there are exceptions for free credit freezes for seniors, minors, documented ID theft victims, etc.

The Federal Trade Commission explains how to place a freeze here.

Be sure to freeze the credit of both spouses!

There are valid considerations for not freezing your credit, as explained in this post by Consumer Reports.  If you take out new car loans or apply for credit cards, you will need to remove the freeze and that can take several days. As the Consumer Reports article mentions, it may be easiest to find out which credit agency your car dealer uses and temporarily lift the freeze at only that agency for only that dealer (or a few).

My household's days of applying for new credit cards is long past and unfreezing my credit a few days before I buy a car every few years isn’t a burden compared to the peace of mind the freeze brings. And if having to unfreeze credit a few days before buying a car stops one of my relatives (you know who you are) from continuing to trade cars on impulse so he or she can later wallow in buyer's remorse, all the better.

Freezing our accounts included the unexpected opportunity to request that the agencies never again allow my credit history to be accessed by someone offering pre-authorized credit cards. This should cut by junk mail problem in half.

Most are not free, although when major breaches occur like the one at Target, the breached company frequently offers a year of such a service free to their customers who may have been exposed. To make my point, I currently have three such services monitoring my credit paid for by three different companies that "may" have offered up my personal credit information to hackers. 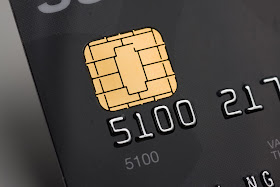 The Risk of Retiring (or Being Retired) Early

Financial journalist, Mark Miller, recently asked me to provide input on a piece he is doing about retiring early. Early retirement is clearly out of reach for most American workers, but as I was working on the article with him, I realized that early retirement issues provide important insights into "normal age" retirements, say from age 65 to 70, and also into the risks faced by the roughly 50% of workers who retire early because they have to. (PDF from Employee Benefits Research Institute. See Figure 34.)

The writer suggested that his research into the topic showed that the answer, more often than not, is "don't do it." That's probably correct, "more often than not", but maybe a better way to say it is that retiring early is probably riskier than most people realize.

There are at least three major financial challenges of retiring early. First, although no healthy person knows how long he or she will live, retiring early increases the expected length of retirement and the number of years we spend in retirement is the greatest unpredictable determinant of retirement cost. (The amount we spend can be a greater factor, but unlike life expectancy and other key factors, spending is at least somewhat within our control.)

It is also a major factor in determining a sustainable withdrawal rate.

When you retire early, you add more years of retirement expenses and, as a result, you add more financial risk. You have to spend a smaller percentage of your retirement savings portfolio annually to mitigate that risk.

Second, retiring early ends savings contributions when they will typically be greatest. Third, retiring early means drawing down savings until Social Security benefits or pension income kicks in. This places additional stress on savings early in retirement that increases the risk of outliving your savings.

Longevity risk is the risk that a retired household will outlive their retirement savings. The major factors contributing to longevity risk are how long retirement lasts, how much we spend each year of retirement and how aggressively we invest. 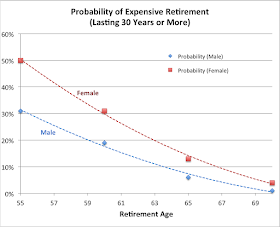 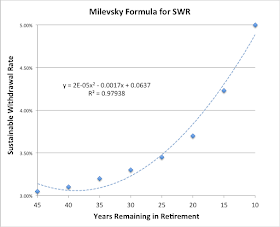 That means that target retirement savings decay quadratically as the length of retirement becomes shorter. 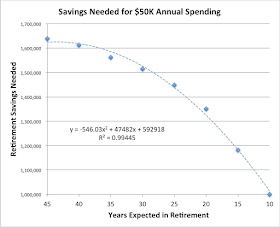 So, those are the first couple of challenges with retiring early, whether voluntary or not. You risk adding years to a retirement that you couldn't have known in advance was going to be a long, expensive one and with that increased longevity risk, you need to save more before retirement or spend less after. Expected retirement costs more because it lasts longer, but also because it is riskier.

This is a consideration for fortunate workers who have a realistic option of retiring early, but it is a severe penalty for workers who have not adequately saved and find themselves leaving the workforce before they had planned. For workers between these two extremes, this demonstrates the value of working even a few extra years.