Sharp-eyed readers will notice that I have tweaked my blog format to include some of my favorite posts from other retirement blogs. Retirement blogs may not be the best place to find sharp-eyed readers and I have three pairs of reading glasses here by my keyboard, just in case. Nevertheless, you will find these posts in the sidebar. This week, I included one from the Canadian Couch Potato blog on Spending Dividends Only and another from Wade Pfau's new website. I hope you enjoy them both.

In my last post, Dominated Strategies, I showed that for retiree's who want to keep their risk below a maximum level throughout retirement, game theory tells us that the variable sustainable withdrawal rate strategy (SWR-V) never provides worse payoffs than fixed-dollar withdrawals (SWR-F) and SWR-V provides better payoffs if the portfolio grows.

Game theory principles tell us that SWR-V weakly dominates SWR-F and that we should never play a dominated strategy, so I cross SWR-Fixed off my list of strategies to consider. (As I mentioned in my previous post, even William Bengen stated that SWR's should be revisited throughout retirement and not set in stone.)

SWR-F underperforms SWR-V, which prescribes spending a fixed percentage of an ever-changing portfolio value rather than a fixed dollar amount, because SWR-V uses new information as it develops over time, the current value of a retiree's savings. SWR-F only calculates a spending amount that was safe on the first day of retirement (an a priori expectation).

There are other important changes besides portfolio balance to the key determinants of the probability of ruin as retirement progresses, including market return expectations, remaining life expectancy, spending needs, and risk tolerance.

As David Blanchett and Sudipto Banerjee have written (both links download PDFs), retirement spending typically declines over time, about 3% a year on average. A retiree's risk tolerance and capacity can also change over time as dependents need less support, for example, or a spouse is lost. And, of course, life expectancy constantly declines at a rate of a little less than a year per year of life. Neither the SWR-F nor the SWR-V strategies account for any of these important changes, leaving open the possibility that there is a strategy that dominates SWR-V.

If considering more data and more timely information improves retirement income spending strategies, then a strategy that considers more new information than SWR-V takes into account could be expected to dominate it. I will refer to this new strategy as "Dynamic Spending."

(David Blanchett and Larry Frank have written about this strategy previously in A Dynamic and Adaptive Approach to Distribution Planning and Monitoring, as has Ken Steiner. Larry Frank provides a nice explanation in a blog post entitled, "How income may compare between Dynamic and Safe approaches.")

Let's consider a version of the Safety First game from Dominated Strategies as a strategic game in which the retiree wishes to maximize available spending while ensuring that risk of ruin never exceeds a desired level. The SWR-Fixed strategy assumes some acceptable probability of ruin, typically 5% to 10%, at the beginning of retirement, but lets the risk drift throughout retirement in order to ensure a predictable, fixed amount of annual spending. Retirees who are happy to see steady spending even when their portfolio declines may not understand that it comes at the cost of increased probability of ruin.

SWR-Variable fixes the variable risk problem of SWR-Fixed but generates unpredictable annual spending. (A retiree spending from a volatile portfolio can have constant risk or constant income, but not both.) In fact, SWR-V "over-fixes" the risk problem because it doesn't consider a declining life expectancy. Over time, risk will decline with SWR-V and SWR-F as the retiree's remaining life expectancy declines. A retiree who thinks a 5% risk of outliving savings is acceptable, for example, might see risk decline to 3% as she ages, which means she will be spending less than she could safely spend. 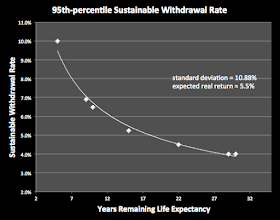 When portfolio values trend upward, Dynamic Spending will have a larger payoff than SWR-V because it will be augmented by a declining life expectancy contribution. When portfolios trend downward, Dynamic Spending will limit increasing risk of ruin by reducing the spending percentage and by adding the declining life expectancy contribution.

As I mentioned in Dominated Strategies, SWR-Variable "over-fixes" risk reduction. Spending a percentage of remaining portfolio balance and ignoring the life expectancy contribution with a declining portfolio eventually lowers risk too much, unnecessarily lowering spending. By considering both, Dynamic Spending adjusts spending to the retiree's current risk tolerance and maximizes spending at that level.

Now, let me try to simplify this rather lengthy post. All three of these strategies use the same basic mechanism. They calculate a sustainable spending amount using Milevsky's formula, simulation or historical data and all three are based on the same information regarding the retiree's financial situation.  The difference is when we recalculate using new data.

SWR-Fixed makes a single calculation at the beginning of retirement and ignores any new information thereafter, no matter how critical that information might be. (Intuitively, this should feel like a bad idea.) The information to calculate the SWR-Fixed sustainable spending amount should include initial portfolio value, expected market returns, life expectancy, and asset allocation based on risk tolerance.

SWR-Variable uses the same information except it recalculates the sustainable spending amount every year, taking into consideration changes to the portfolio value from the previous year, but nothing more. And it assumes that the withdrawal percentage calculated at the beginning of retirement remains the best one. Doing so reduces sequence of returns risk, but it doesn't maximize sustainable spending.

Dynamic Spending recalculates sustainable spending every year, too, but it doesn't stop with updating portfolio values, as does SWR-V. It also updates a decreasing life expectancy, changes in risk tolerance and capacity, and expectations about future market returns. Dynamic Spending maximizes the sustainable spending amount given the retiree's current risk tolerance.

Dynamic Spending always provides better payoffs when risk is considered appropriately than does SWR-Fixed or SWR-Variable. SWR-Fixed and SWR-Variable are strategies that are dominated and should never be played. That's a stronger message than "some of these strategies are sometimes better than others."

One of my hobbies is shooting sporting clays, so the following analogy works for me. Hopefully, it will help you visualize the comparison of strategies, too. In sporting clays, the objective is to break a clay target with a shotgun.

Trap and skeet throw targets in predictably similar paths all the time, but sporting clays can come from anywhere and go anywhere, relatively speaking. In retirement finance, breaking the clay is symbolic of reaching the end of retirement with at least a little money to spare. That's our target.

SWR-Fixed is analogous to aiming where targets have ended up most often in the past, yelling "pull" and shooting in that direction.

SWR-Variable adds some data to the calculation: the changing value of your savings over time. 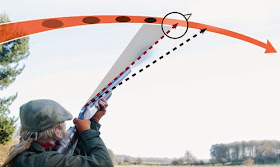 SWR-V is like deciding that you will track every target through its path and shoot a foot in front of it (lead it).  A foot will work for some shots that quarter away from you, but it won't be enough for a target that crosses directly in front of you or is farther away. Nonetheless, you are a bit more likely to hit the shot than by aiming where a lot of targets have gone in the past because you are now considering more information, that being where the target currently is and not just where targets have historically been.

Dynamic Spending is like tracking the target, knowing where it has been and where it is, and consequently where it is likely to soon be, estimating its vertical and horizontal speed and meeting the target with the correct lead. If the target is falling, you shoot below it. If it's a crossing target, you shoot farther ahead. You adjust your aim constantly. You hit a lot more targets that way.

Although all three of these strategies are proposed as viable alternatives, game theory tells us that Dynamic Spending dominates the other two and should always be our choice from among these three.

The explanation may be complex, but the advice is straightforward. If you're going to fund retirement by spending from a volatile portfolio of stocks and bonds, recalculate a sustainable withdrawal amount every year based on your revised expectations of future market returns, life expectancy, risk tolerance and capacity and estimated future spending needs.

Even if you ultimately decide to spend more, you'll at least know how much risk you're taking.

Next, I'll consider the application of game theory's Pure and Mixed Strategies.